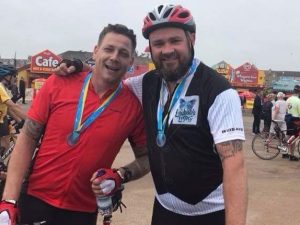 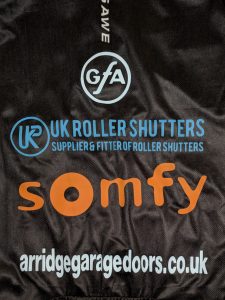 Arridge Garage Doors were once again the proud sponsor of Matt Barber from Aluroll as he took part in an annual charity bike ride from Leicester to Skegness. Matt joined over 300 other cyclists and completed the 86 mile journey in just over five hours.

Matt said he was delighted to have taken part: “I was in a team of four riders from Oswestry who took part on behalf of the Loubobs Legacy which is part of the Brain Tumour Research charity. I did this because my best friend’s son died of a brain tumour and I wanted to make a contribution to the charity’s work.

We all had a great day and we’re aiming to do the ride again next year. I’m going to try beating my five-hour record next year so I’ll be doing lots of training over the winter.”